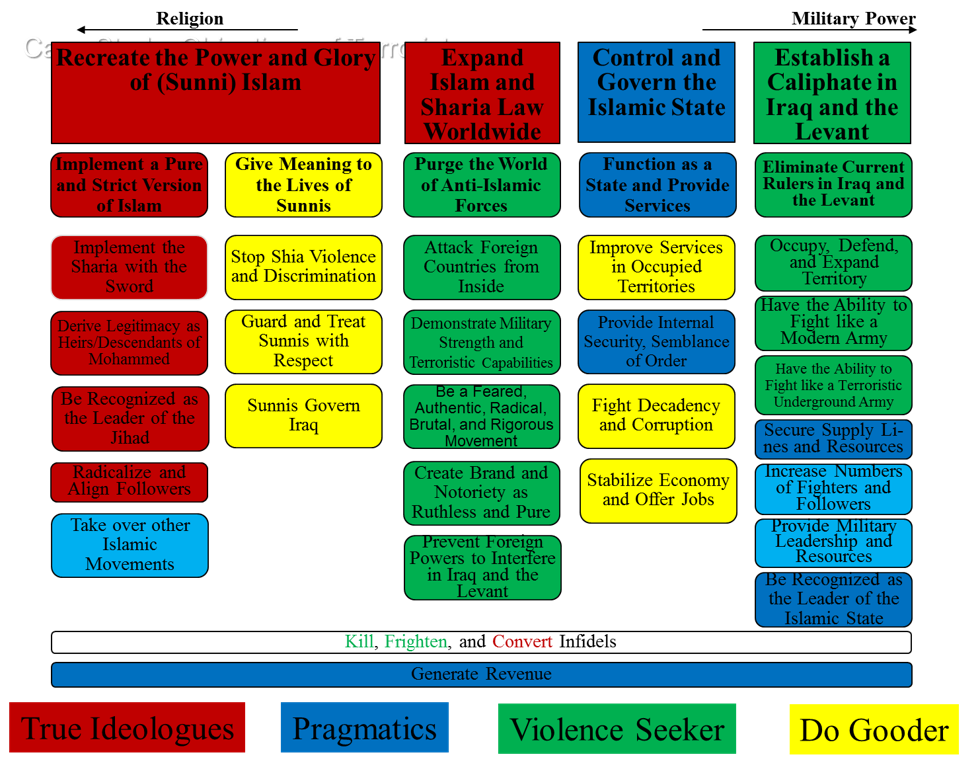 In summer 2014, the terrorist group Islamic State was one of the most severe threats for the civilian population in the Middle East as well as in the West. The American government did not had a clear strategy how to deal with this new threat. Pres. Obama even admitted this in public (“We don’t yet have a complete strategy” for fighting the Islamic State in Iraq; 28. August 2014, in Washington Post).

General Nagata, Head of Special Operations Command Central (SOCCENT) sent at the end of August 2014 an urgent request to the Center for Risk and Economic Analysis of Terrorism Events (CREATE) at University of Southern California to find out, what the terrorist group Islamic State wants, i.e., the objectives the leaders of the followers, and why they are so attractive to their followers. This task is particularly difficult, because there is no access to the leaders and members of the terrorist group Islamic state for interviewing them. Therefore, the Office of the Joint Chief of Staff in the Pentagon reached out to 59 subject matter experts with backgrounds in terrorism research, Islam, political science, military strategy, the Middle East, peace research, etc. and conducted semi-structured interviews. Prof. von Winterfeldt, one of the worldwide leading counterterrorism researchers and founding director of CREATE, analyzed these interviews to identify and structure the objectives of the leadership and the followers of Islamic State. Prof. Siebert took the lead in the second, separate effort solely based on open sources available on the Internet, for example primary sources such as transcribed speeches of Islamic State leaders or secondary sources such as newspaper articles or scientific papers. In the next step, both separately and independently derived objectives hierarchies were compared and merged. There was a great deal of overlap and similarity.  However, the researchers also found some notable differences, especially regarding the followers’ objectives, which could be explained primarily by the different sources used.

The results indicate that Islamic State’s leaders pursue four strategic objectives “Establish a Caliphate in Iraq and the Levant”, “Control and Govern the Caliphate”, “Expand Islam and Sharia Law Worldwide”, and “Recreate the Power and Glory of (Sunni) Islam”. The followers’ objectives can be partitioned into three strategic objectives: Humanitarian Fulfillment, Religious Fulfillment and Personal Fulfillment. The objectives identified from the subject matter expert interviews were similar to those identified from Islamic State leaders’ statements and the Internet. However, the Internet search revealed many more personal objectives of Islamic State followers. The results further indicate that Islamic State`s leadership objectives are closely aligned with those of its followers. There also is a sharp contrast between the objectives of Islamic State and those of Al Qaeda, particularly Islamic State’s emphasis on occupying and controlling territories on Iraq and Syria vs. Al Qaeda’s focus on worldwide jihad. The objectives hierarchy of the leaders of Islamic state is illustrated in the following figure.

This study resulted in a successful publication in the INFORMS journal Decision Analysis. In addition, the editor of Decision Analysis, found that the importance of the study warranted the creation of a media campaign through special announcements and a blog, the first time that this journal has made such an effort. Perhaps more importantly, the work made an impact on a major policy area by providing a report to General Nagata and the US Special Operations Unit in the Middle East. The study was nominated for the final of the Practice Award of the INFORMS Decision Analysis Society because of the high level of novelty of the methods to systematically identify and structure objectives of an organization when there is no access to the decision-maker and the high impact on the real world. A detailed description of the method and results, the project report and selected media coverage can be found in the following